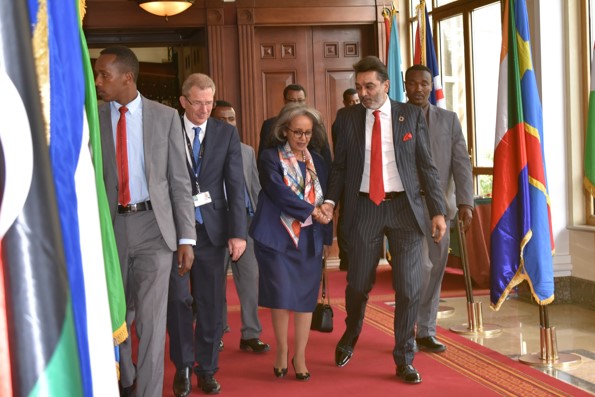 The African Leadership Meeting was held in Ethiopia on 9th February 2019.The main agenda was  “commitments for investments in the health sector across the continent with an emphasy on the importance of partnerships in order to grow the healthsector. The leadership meeting was co-organized by  Africa Health Business.” Dr. Amit N. Thakker, Chairman Africa Healthcare Federation, emphasized that deepening private sector integration within the African health system is non-negotiable. He urged the government leaders to embrace the private sector and improve both Public-Private Dialogue and engagement in the respective African countries through the Ministries of Health. Countries that practice this openly have already shown positive results Dr. Thakker  said this while moderating a panel session themed “Domestic Financing for Health, Effective Partnerships and Private Sector Engagement”

H.E President Uhuru Kenyatta, President of Kenya, acknowledged that investments in health were integral to achieving the social economic agenda and that it was necessary to build partnerships to achieve Universal Health Coverage. The Kenyan President urged other leaders to create an enabling environment for the private sector in order to build confidence and attract investments into health systems. It was stressed that the health sector is a viable investment area where the return on investment is substantial such that investors can expect between 9 – 20 times the level of investment. The meeting led to increased commitments of US$200 million from both public and private health sector and donor governments (Higherlife Foundation, The Government of Ireland and the Government of France), to end epidemics and achieve Universal Health Coverage.H.E. President Sahle-Work Zewde, President of Ethiopia, called on the African leaders to bring hope and opportunities to the people of Africa through transformational leadership Investments in healthcare would improve the quality of life across the continent and allow African populations to lead full, productive and prosperous lives. She emphasized that investments in healthcare underpin national development. Mr. Bill Gates, Co-Chair of the Bill and Melinda Gates Foundation, urged immediate action in order to end epidemics and meet health targets.

It was suggested that African Ministers of Health should meet more frequently to work together on the health status in the continent and report their progress to the AU Heads of State and Government Summit. In this way, African governments can learn from initiatives across the continent, identify synergies that unlock efficiencies and collaborate in relation to continental priorities. African leaders urged their counterparts to focus on improved efficiency in order to strengthen national health systems. For the private health sector, the meeting was received as a key step towards acknowledging sustainability and private sector efforts towards health outcomes. The meeting was an important platform to build on Public Private Dialogue, create awareness and commitments in relation to investments in healthcare in Africa and urge the African leadership to create an enabling environment for business. This shall lead to a stronger private health sector which can further contribute to economic development and goals towards achieving Universal Health Coverage in an efficient and affordable manner.