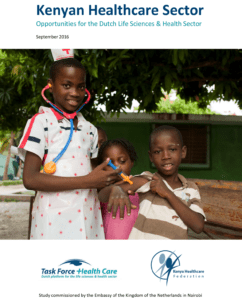 This report was commissioned by the Embassy of the Kingdom of the Netherlands (EKN) in Nairobi, Kenya. It is produced by Kenya Healthcare Federation (KHF) and Task Force Health Care (TFHC) and sets out a high level analysis of the healthcare sector in Kenya, business opportunities for organisations active within the Dutch Life Sciences & Health sector, and recommendations for the EKN on how to increase the involvement of the Netherlands in the Kenyan Healthcare sector.

Kenya is one of the 6 countries of the East Africa Community (EAC) and is widely regarded as the business hub for East Africa. The economy is growing, the workforce is strong and capable, the population young and educated, and English being one of the national languages (besides Kiswahili). Together with the economy, Kenya’s middle class (44.9% of total population) and the demand for quality healthcare is on the rise.

Kenya has an estimated population of 46 million with an average population growth of 1 million per year, with a median age of 19 years and a high (although declining) fertility rate of 4.4 children per woman. The country is experiencing a population flow from the rural areas to the city centres and currently about 25% of all Kenyans live in an urban setting.

Kenya’s burden of disease has historically been mostly focused on communicable diseases. However, recent research shows a large and fast increase in the prevalence of non-communicable diseases such as cancers and cardiovascular diseases. This is mainly attributed to life style changes of Kenyans.

In 2010, Kenya adopted a new constitution which created a devolved government which established 47 counties which are governed by their own governments and have a relatively high degree of autonomy when it comes to budget allocations – including for healthcare.