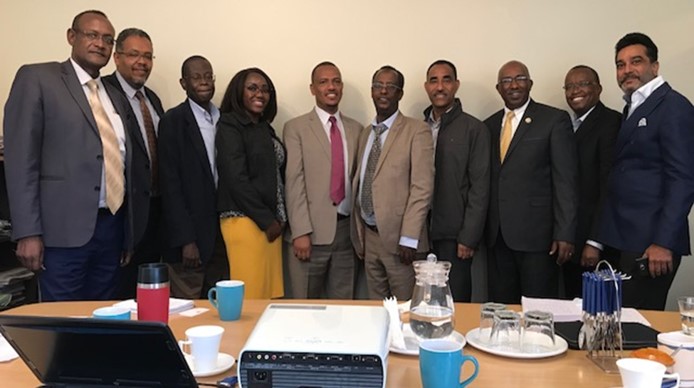 KAPI was represented by Dr. William Mwatu, Dr. Francis M. Karanja and Dr. Eva Amwayi who introduced themselves to the Ethiopian delegation as one of the pioneer associations to be established in the pharmaceutical sector. It plays a great role in safe – guarding the interests of its members by getting involved in policy drafting and implementation. It also has implemented a self-regulatory system within its member institutions which has played a key role in a fostering a close working relationship between its stakeholders and public sector. It’s financial sustainability is guaranteed through membership contributions, projects supported by partners such as; the World Bank, IFC, Netherlands embassy as well as Public – Private Partnership (PPP) programs in the sector. The association’s membership is voluntary and open to institution in the pharmaceutical sector that subscribes to KAPI’s code of ethics.

The Pharmaceutical Society of Kenya (PSK) was represented by their CEO, Dr. Daniella Munene, Dr. Munene introduced the 58 year old organization to the Ethiopian delegates, informing them that PSK seeks to promote ethical practice and promote continuous professional development (CPD) amongst it’s members. She went on to explain that PSK membership is drawn from members working in private, NGO and public sectors provided they are registered by regulator, the Pharmacy and Poisons Board. The society provides CPD to members, requiring them to attain a certain number of CPD points annually for renewal of membership. PSK membership is in turn a mandatory requirement for annual licensure by the regulator .

This constitutes a self – regulatory model which goes a long way in curbing malpractice and gives the society leverage in enforcing membership. The National Nurses Association of Kenya (NNAK) was represented by their President, Mr. Alfred O. Obengo. He informed the Ethiopia delegation that NNAK fifty years old and one of the strongest members of the KHF due to it’s numbers. The association functions in all 47 counties of the nation. At grass root level, the local branches of the association deals with the local county administrative organs. The national association has a seat at KHF where it presents the issues that are not solved at the county level. This is the key benefit cited by Mr. Obengo that NNAK has gained from being a member of KHF. He further elaborated that KHF has contributed a lot to the Universal Health Coverage(UHC) agenda of the country, as the government has identified private sector as missing link in UHC – realization. Other benefit of KHF membership as mentioned by Mr. Obengo are networking and – new business opportunities its members. NNAK also provides a CPD program to its members, who must demonstrate that they attained the minimum number of CPD points at the time of annual license renewal.

Dr. Christine Sadia, National Chair of Kenya Medical Women’s Association (KEMWA) introduced her association to the Ethiopian team, informing them that the association has a strategy known as “From Womb to Tomb” that focuses on women, encouraging them to take care of themselves in the midst of their demanding dual roles of home makers and health professionals. Membership is open to all healthcare professionals. Their members are also members of their parent Kenya Medical Association(KMA).KEMWA has a program that supports their members to go back to school to further their education.  Dr. Jacqueline Kitulu, President, Kenya Medical Association(KMA), welcomed the Ethiopians and explained that  KMA has a very strong voice in KHF as it is also represented in the Board of Directors.

The Ethiopian delegates were later invited for a dinner meeting by COSMOS Pharmaceuticals where, Dr. Dawit Moges expressed his gratitude for the warm welcome and hospitality given by KHF Secretariat, In addition, he applauded the advocacy work being done by different Healthcare Associations in Kenya saying, “As a pioneer in the region KHF has accomplished lots of impressive deeds that should be taken as exemplary and should be considered to be installed in ours. The Ministerial Stakeholder Forum” and the “Presidential Round Table” could be the first milestone that should be given emphasis while drawing the roadmap of the long journey of Ethiopia Healthcare Federation. Openness to all health associations for membership and revenue generation through projects can also be emulated” He concluded.