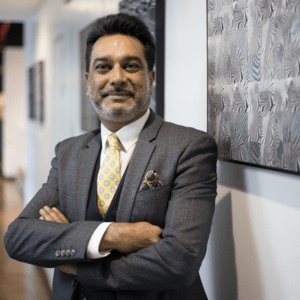 A visionary, an entrepreneur, and an industry captain,

Dr. Amit N. Thakker has been a groundbreaking pioneer in the metamorphosis and integration of healthcare management in Africa.

In 2004, the Kenya Private Sector Alliance (KEPSA) created its health sector arm, the Kenya Healthcare Federation (KHF), and Dr. Thakker served as one of its founding directors.In addition to influencing public policy, KHF actively advocates for issues facing the health sector. The Federation is also dedicated to engaging the government and all relevant stakeholders in achieving quality healthcare by maximizing the contribution of the private sector in Kenya. Dr. Thakker was elected as Chairman of KHF in 2015.

Under his leadership as both Board member and subsequently Chairman, KHF has been the instrumental player in establishing the East Africa Healthcare Federation (EAHF) in 2012, which champions the same ideals at the regional level covering Burundi, Ethiopia, Rwanda, South Sudan, Tanzania, Uganda and Kenya. The Federation brings private sector stakeholders together under one umbrella body to advocate for policy change and to champion the interests of the private health sector in the region.With the aim of facilitating the unification of all stakeholders in the health sector, and to promote a platform for effective public private dialogue so as to drive change in Africa’s healthcare systems,

Dr. Thakker established Africa Health Business (AHB), a company that stimulates the business of healthcare in Africa, in 2015. AHB facilitates an annual Pan-African business symposium known as the Africa Health Business Symposium (AHBS) in a different region of Africa every year. AHBS is a platform that engages multi-sectorial stakeholders to strategize on overcoming healthcare challenges in Africa through public private partnerships, with the goal of an all-inclusive dialogue as well as development. It was at the first AHBS in Nairobi, Kenya in 2016, and under the initiative of Dr. Thakker, that the Africa Healthcare Federation (AHF) was launched; unifying the 5 regions of Africa (Central, North, South, West and East) comprising of 45 countries, under a singular health platform. This Federation is the voice of the private health sector in Africa working closely with Governments and Development partners to improve overall health on the continent through transformative
policies, thus raising Africa to global standards. It works under the theme “One Continent: One Team”.

The Directors on the Board are drawn from all the 5 regions of Africa, who will act towards facilitating pro-growth policies, fostering public private partnerships, encouraging innovations and disruptive technologies, increasing
investments in health, promoting appropriate regulatory frameworks in the region and advocacy. Through this regional harmonization, the effort to deliver quality healthcare to the over 1.1 billion African residents, is now gradually becoming a tangible reality. As an award winning medical doctor, entrepreneur and health sector champion, Dr. Thakker is also affiliated with several private companies in the health industry. He was the Co-Chair of the Private Sector Advisory Panel through UNFPA, and Vice-Chairman of the Public Private Partnership, Health Kenya (PPP HK).

He was appointed on the Board of EEIG in Germany (European Centre of Expertise of the Healthcare Industry), AMREF Flying Doctors (Kenya), and Seven Seas Technologies. As a health expert, he has and continues to
provide high level advisory and consultancies to developmental partners such as World Bank/IFC, PharmAccess, GIZ, German Healthcare Partnership, Global Fund among others. In the private sector he is well recognized for his strategic consulting roles with Africa Medical Investments (Mozambique, Zimbabwe and Tanzania), Momentum Africa (South Africa, Kenya, Tanzania and Zambia), Aetna Incorporated (USA and Dubai), Acacia Medical Centre, Guru Nanak Hospital and Humming Health (Kenya).

Being an impactful figure in the healthcare industry, Dr. Thakker has been awarded several accolades. In September 2017, he was awarded as the Regional Winner in the Business & Professional Services category, for
his leadership, strategic vision & exceptional contribution in the African Business sector by Titans: Building Nations CEO Global. He was also voted the “Best Male Entrepreneur of the year” by Rotary International in
1999. In 2004, he was awarded the Chairman’s Award by Kenya Medical Association, and in 2005, he won the Best Chairman’s Award by the Round Table Association in East Africa, an international organization of young
men below the age of 40 from different professions, races and ethnic groups.
With over 20 years of experience in operations, change management and business networking coupled with successes in challenging economies and cultural contexts.

Dr. Thakker has successfully spearheaded the establishment of medical and primary health organizations in various developing countries including
Mozambique, Zimbabwe, Rwanda, Nigeria, Tanzania and Kenya. He is a much sought-after speaker and mentor on social entrepreneurship, leadership and healthcare management having given talks all over the world.

An accomplished champion in healthcare management, he is well recognized for his integrative approach in providing innovative and bold business cross cutting solutions in the health services and financing sector within Eastern and Southern Africa.

Dr. Thakker has a Bachelor’s in medicine and surgery from the University of Nairobi, Kenya and an Executive MBA from National Insurance Academy (NIA) in India. He has also completed a Health Leadership training from George Washington University, USA.